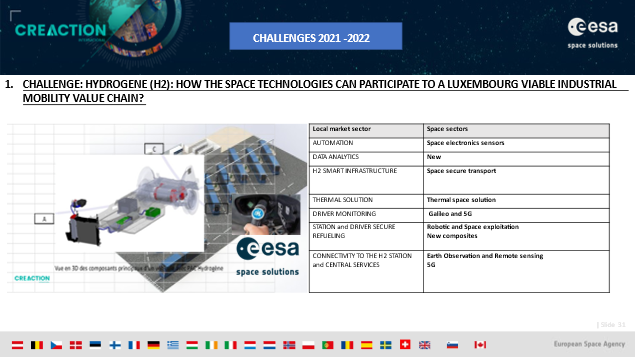 Each year the cross-border Franco-German PhD day brings together scientists from both sides of the frontier. The topic of this fifth edition, which was organized on 23 November 2021 in Metz at the “German Gate”, focused on hydrogen.

A total of twelve 12 PhD students shared their work and the general outline of their research with regard to the transformation, storage as well as the distribution of hydrogen in the Greater Region. The cooperation is not a one-off event but is part of longer-term efforts which also involve the creation of projects with industry. Cefalor, represented by Mr Patrick Barthel, is a methodology partner in the PUSH-GR project and hydrogen is a current scientific and industrial priority in the Greater Region. It takes into consideration common technological solutions and constraints which are also related to cross-border mobility.

CREACTION was invited to share its knowledge and expertise with the scientists: in the morning the focus was on the exploitation of space technologies available through the Business Application Space Services of ESA with a view to optimizing future processes and products resulting from research. In the afternoon, the team met the various French and German managers of institutions wishing to set up a fully-fledged hydrogen sector in the Greater Region. In fact, for the past two years, CREACTION has been studying and participating, under the aegis of Luxinnovation / the automobile cluster and the Luxembourg Ministry of the Economy, in the creation of an applied industrial research project which is situated downstream of the sector.

The J. Group in Luxembourg applied to the Ministry to carry out a research project entitled RANGE EXTENDER SYSTEM H2J, zero emission. All the components of H2 mobility are involved, ranging from the fuel battery and the electric motor to the new systems and subsystems adapted to this type of energy transformation as well as the specific tools for tailor-made fittings (weight/resistance, safety, reliability). The development of the new concept by the J. Group fits well with the Grand Duchy’s plan for the roll-out of the H2 sector. It is planned to integrate a number of space technologies in order to optimize fully the future H2 mobility system.

In the afternoon, the floor was given to the new Franco-German projects currently being set up to supply the Greater Region with hydrogen. Together with their partners in the PUSH-GR Interreg project, CREACTION proposed to make available their own resources, in particular through their creativity sessions organized at the Space Creativity Centre at ESEC ESA – REDU. In this way, CREACTION and their partners hope to offer the best of their value added services to the Greater Region’s budding H2 projects.

This Erasmus+ project, in which Créaction has been providing an advisory role, involves three academic partners – the Haute Ecole Francisco Ferrer (HEFF) in Brussels, specialized i ...

On 10-13 May 2022 Créaction's Managing Director, Jean-Paul Henry, and Administrative Manager, Maria Radulovic, participated in the Portugal-Luxembourg Economic Forum, which was an ...

The competition with €15 000 of prize money is funded by the ESA Commercialisation Gateway and supported by the Luxembourg Space Agency and is open to all companies, independent of ...